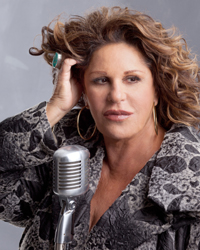 Have lunch with film, television and Broadway star Lainie Kazan

Luncheon to be held in the dining room at
ANNENBERG CENTER FOR HEALTH SCIENCES
at  Eisenhower Medical Center
39000 Bob Hope Drive, Rancho Mirage

Lainie Kazan began her career as Barbra Streisand’s understudy in the Broadway production of Funny Girl.  She soon became the “chanteuse” of her native New York, appearing in nightclubs and as a guest on virtually every top variety and talk show on television. She was nominated for an Emmy Award for St. Elsewhere and received a CableACE Award nomination for The Paper Chase.  She has guest starred on Will & Grace,  The Nanny, Desperate Housewives, The King of Queens and Modern Family. Her films include One From The Heart, Beaches, Don’t Mess With the Zohan, Pixels, and My Favorite Year for which she received a Golden Globe Award nomination for Best Supporting Actress. She played the mother in My Big Fat Greek Wedding and the sequel My Big Fat Greek Wedding 2, to be released in March 2016. Kazan received a Tony nomination for her role in the musical version of My Favorite Year at the Lincoln Center.  She produced and starred on Broadway with Bette Midler, Madeline Kahn, Patti LuPone, Elaine Stritch and Andrea Martin in Doin’ What Comes Natur’lly, and an all star tribute to Ethel Merman. She is now teaching at UCLA and is starting a Cabaret program there as well.